Another day, another train – this trip a series of four regional trains that will take us to the town of Rosignano, where Sara lives.

Sara stayed with us three years ago, when she came to America (which seems to be the preferred way to call the United States) as a Rotary Exchange student. She did a year at our high school while Megan was finishing her last year there, and the two girls are still good friends.

Sara and her parents met us at the train station, and there were tears and hugs all around. Daniele, Sara’s dad, drove us back to their home where we were told to put on our swimsuits and join them at the pool…they had just finished turning their back yard into a lovely pool area and deck. After a game of king-of-the-hill with a giant inflatable unicorn, we sat on the terrace and ate gnocchi with pasta sauce and Daniele’s braised tuna steaks, which were delicious, like all the food we have had here so far.

Rosignano is a beautiful seaside town, and though the weather was beautiful, we could tell that we were moving farther south…a little bit hotter. The next morning, we piled into the car with Simona while Daniele was at work, and drove downtown to see the stylist who does Sara’s and Simona’s hair. Megan has the tips of her hair dyed blue, then slowly turning green, so she decided it was time to cut it off…and what better place than Italy? The stylist did a beautiful job, and Megan was happy.

Megan gets her hair cut at il parrucchiere

That afternoon, Daniele came home from work and drove us all to Pisa, about 45 minutes away down an autostrada that had Daniele using all the Italian gestures we have come to know and love. I asked a grammar question that had Daniele and Simona arguing for about 5 minutes, while Sara just shrugged her shoulders and smiled.

Sara and Megan by the Torre di Pisa

Yes…the leaning tower is worth a visit! It sits in a lovely piazza, and was intended to be the bell tower to Pisa’s duomo and baptistry. Unless Sara’s family had taken us there, we would not have had time to see it (on this trip…)

The tower was built over 200 years, starting in 1173. It started tilting when the second floor was begun, five years later, because the foundation was not deep enough and the subsoil was weak and unstable. Construction was stopped for a while so that Pisa could go to war with Florence, Lucca and Genoa. This was actually a good thing for the tower, because it allowed the base to settle. Otherwise, the tower would have probably collapsed.

In 1272, construction began again. The tower has a slight curve to it, because engineers actually built the upper floors with one side taller than the other to compensate for the tilt. Construction was halted again when the Pisans went back to war with the Genoans and lost. The tower was finally finished in 1372 with the addition of the bell tower. There have been efforts made even into modern times to stabilize the tower, but the tilt was left because it was good for tourism.

More war history… In WWII, the Allies suspected that the Germans might be using the tower as an observation post. The U.S. Army sergeant sent to confirm this was struck by the beauty of the cathedral and tower, so he refrained from ordering the artillery strike that would have destroyed it.

We said goodbye to Sara and her parents at the Pisa train station where we caught a train for Florence. I’m so happy we were able to see her again, and meet her parents… they made us feel so welcome and appreciated. Maybe we will see them again in a year or two, when they are planning to come to the U.S. in the summer.

And Sara actually leaves for New York next week! The world is so small these days…and with trains, it’s been easy to see it. 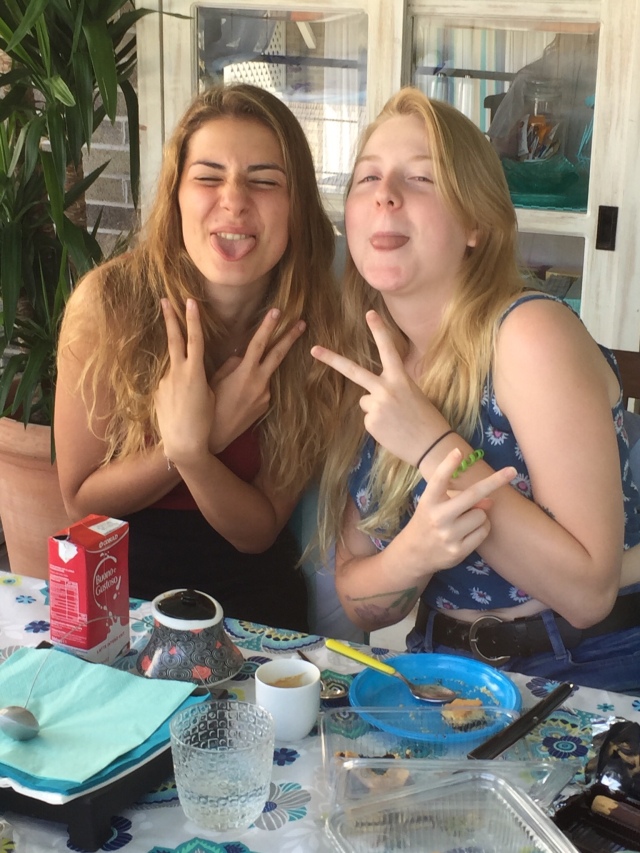 Too many good books, too little time: Current reads